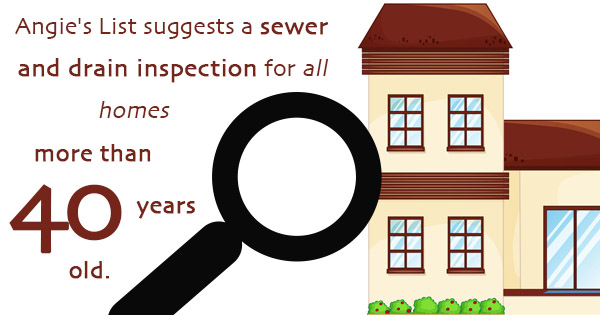 Across the pond in England this year, a burst sewer pipe in west London made international news when plumbers discovered something terrifying below ground. When London workers lowered a sewer camera into the pipes they encountered something straight out of a plumber’s worst nightmare — an 11-ton “fatberg” clogging up an aging sewer pipe. Video from the camera drain inspection went viral, as people around the world couldn’t look away from the mother-lode of clogs.

When people flush too much paper, wet wipes, cooking oil, and other kinds of debris into the sewer lines, massive blockages can form and back up the entire system. The west London “fatberg” caused more than $600,000 in damage and took two months to repair. But mostly, it was just super, super gross.

Older sewer systems sometimes accumulate messes like that, and it’s a plumbers job to make sure everything flows smoothly. Stateside, consumer expert Angie Hicks (yes, we mean that Angie, from Angie’s List) suggests a sewer and drain inspection for all homes more than 40 years old. In older U.S. cities, especially on the East Coast, many houses are overdue for their inspection.

While you may not have a “fatberg” lurking in your home’s pipes, there are other hazards homeowners face. Tree roots in particular threaten sewer pipes, causing them to burst and creating messy backups.

Trenchless pipe rehabilitation might not have saved London from “fatberg,” but it could save your home from disaster. Experts say trenchless pipe lining is extra durable, and warranties are available to safeguard homes for decades to come.

Trenchless plumbing repair has only been on the market for 10 to 15 years, but it’s already become the new industry standard for replacing old pipes.